What If I’m Hit by a Car outside of the Crosswalk?

What If I’m Hit by a Car outside of the Crosswalk? 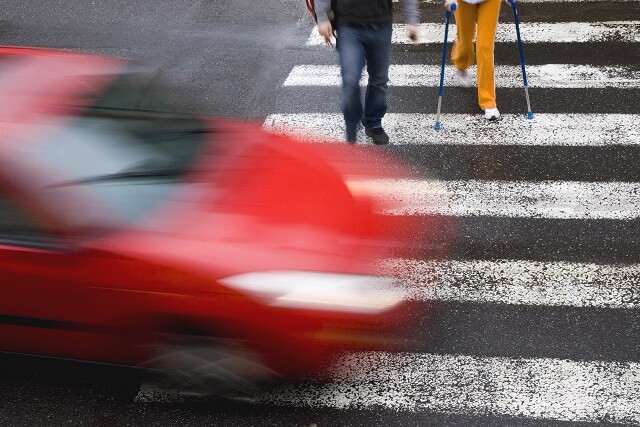 When a vehicle strikes a pedestrian, you assume that the pedestrian has the right-of-way. But what if the pedestrian wasn’t in the crosswalk? Who is liable when there are no crosswalks indicating a pedestrians’ right to pass, and would the driver still be liable for damages?

While pedestrians often have the right of away in accidents with a motor vehicle, a motorist that hits a pedestrian is not always at fault in these situations. Instead, it depends on the circumstances that led to the crash and how each party contributed to the accident itself.

The Driver, Pedestrian, or Both Might Be at Fault

In car-versus-pedestrian accidents, the driver, pedestrian, or both might be at fault, depending on the circumstances.

When the Pedestrian Is in the Crosswalk

The driver is automatically at-fault when the pedestrian is using a legal crosswalk. The rules clearly state that drivers must yield when a pedestrian is passing through a crosswalk, and some states even prohibit vehicles from entering the crosswalk until the pedestrian has touched the sidewalk on the other side of the street.

Intersections in between streets may have unmarked crosswalks. But in these instances, the court might still find the pedestrian had the right of way because they are still considered pedestrian crosswalks.

When the Pedestrian Is Not Using the Crosswalk

If the pedestrian is not in the crosswalk (such as jaywalking) or they were to run into the middle of the street, then the pedestrian and motorist might both be at fault here. Drivers, regardless of where a pedestrian crosses the road, have a duty of care to look out for potential accidents and avoid them.

Likewise, a motorist must exercise caution in areas where pedestrians may enter the street unexpectedly, such as in neighborhoods. If a driver is speeding through the neighborhood, they may not see a child run into the street. In this case, the driver would still be at fault because they were not obeying the traffic laws for that street. Any time a driver fails to exercise the appropriate amount of care, they can be held liable for the injuries they cause.

The Pedestrian Could Be at Fault

Pedestrians might be found negligent if they contribute to the accident. Examples would be crossing when the crosswalk sign clearly states to not cross, jaywalking, or they are walking on an area of road that is not accessible for pedestrians, such as the side of the highway.

Can You Still Seek Compensation If a Car Hits You outside of the Crosswalk?

Yes, you might still receive compensation for these types of accidents, but the amount of compensation you receive will depend on your role in the accident.

Most likely, the driver’s insurance company or their defense attorney will try to put a majority of the fault on you or at least enough of the fault so that they do not have to pay maximum compensation. Therefore, if you were involved in an accident but you were not in the crosswalk at the time, you should contact an attorney immediately. These cases can be highly complex, and without proper legal representation, you may not receive the compensation you deserve.

When a pedestrian is not in the crosswalk, the courts may use comparative negligence to determine how much compensation is due to the pedestrian.

Comparative negligence allows a person to still collect compensation, even when they are partially at fault for the accident.

In the state of Washington, pure comparative negligence is what the state uses to determine how much each party would pay in an injury case.

Under the pure version of comparative negligence, there is no threshold that prohibits you from seeking compensation. In some states, if you are more than 50 percent negligent, you cannot seek compensation. However, in Washington, you could be 99 percent at-fault and still request compensation (although, this is not advised).

In these cases, if the court does decide that a pedestrian is partially at fault because they crossed the street while outside of the crosswalk, then the court would consider how much fault they contributed and assign a percentage to that accident. Once they assign a percentage, the total settlement awarded to the victim would then be reduced by their contribution percentage.

For example, a pedestrian is injured in an accident with a motor vehicle. The court determines that he or she is approximately 20 percent at-fault. The court awards them $100,000. However, because they were 20 percent at-fault, the court reduces that amount by 20 percent, which means $20,000. In the end, the victim still leaves with $80,000.

Why You Need an Attorney When Comparative Fault Applies

If your injury case involves comparative fault, you must contact an attorney immediately. It is easy for a defense attorney to push more of the blame on a victim than necessary – especially when that victim does not have an attorney fighting for their right to collect fair compensation.

With an attorney by your side, you have an advocate who will fight back against insurance companies and defense attorneys looking for every opportunity to reduce your settlement amount.

Speak with an Injury Advocate in Your Area Today

If you or loved one was injured in a crosswalk accident or you were outside of the crosswalk at the time of the incident, do not assume you cannot unlock compensation. Instead, speak with an attorney from Hames, Anderson, Whitlow & O’Leary to explore your options.

We will discuss your case, help find evidence showing that you were not at fault, and gather the necessary evidence to ensure you get the compensation you deserve.

In these instances, you could receive compensation for lost wages, medical costs, loss of earning capacity, pain, and suffering.

To explore your options and learn more about your rights, contact us to schedule your consultation appointment by calling us today or requesting more information online.